Elvis and The Way It Was Orchestra 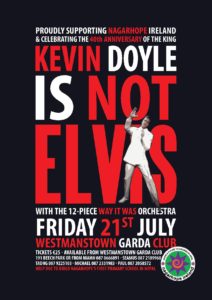 Doc and Nagarhope are having a fundraising night on Friday 21st of July in Westmanstown Sports and Conference Centre.

Nagarhope was established by Doc in 2007 to help educate children in Nepal, where he lives with his Nepalese wife and their two children. Nagarhope Nepal Committee have worked tirelessly in Nepal for the past 10 years, educating children with the help of sponsorship from Irish and foreign friends. In 2014, Nagarhope built its own preschool. This has run very successfully and has now been expanded to take in primary class 1, thus allowing its pupils to stay in their “own” school. The aim is to expand further, adding one class each year.

In 2015, the building was damaged by the earthquakes. It has been deconstructed and painstakingly re-constructed, under new earthquake–proof guidelines.

So bring on ELVIS!

Kevin Doyle as Elvis is a Lucan man, as are many of the “Way it Was” orchestra. Indeed, many of them started their music years in Eithne Donnelly’s Lucan Concert Band as did Doc himself. They played a sell-out concert for Nagarhope in 2009 and what a night it was!

Come along. Bring some friends. Make it a night to remember.

This promises to be a great night. We expect that tickets will sell out pretty quickly.

Looking forward to seeing you there.