Nagarhope had been assisting the education of individuals and schools in its formative years and still is. It was only after we acquired 1 ½ acres of land in Sathikurya, Kavre District that priorities started to change. To do anything here, to develop a building, a base, first we would need a road. 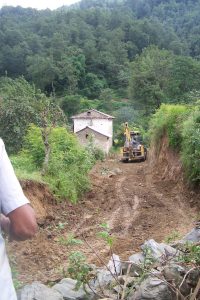 It was an area in which we didn’t know the locals, 4 kilometres down a rocky road from Nagarkot. We had looked at different sites and finally settled here. In September 2013, over the space of 4 days, through consultation with (and some opposition from) the locals, a road was constructed and some of the land levelled for possible future use. 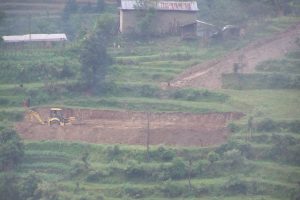 This road has served 20 or so families of the community over the years and has enabled locals to transport materials / farm produce to and from the market. Until the 2015 earthquakes some had little use for the road, but since then the locals have been transporting building materials directly to their doorstep, saving time and money, to rebuild their devastated homes.