Nagarhope Nepal is a Non-Governmental Organisation (NGO), registered with the Social Welfare Council of Nepal, and District Administration Office, Bhaktapur District. Founded in 2009, Dhurba and ten other founding members established this NGO so that Nagarhope could be officially recognised by the respective government line agencies within Nepal.

Nagarhope Nepal submits progress and financial reports on an annual basis, pays necessary taxes on rented premises and salaries and is compelled to complete an annual audit that must be presented to various government entities, both local and district wise. The Nepali team are responsible for preparing budgets and programs and updating members through meetings and the customary Annual General Meeting.

Nagarhope Nepal keeps in regular contact with its main donor agency – Nagarhope Ireland – through prepared budgets, updates on social media / email. In this way, all aspects of the day to day runnings of the NGO as well as extra unprepared-for programs (e.g. earthquake) keep both organisations clear on what is going on. 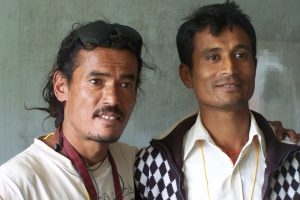 Dhurba ‘Baba’ Bhujel, the founding chairperson of Nagarhope Nepal, presided over the NGO from 2009 until 2016, when Rabindra Suwal assumed chairperson duties. In early 2019, Badri Shahi Thakuri was elected as the new chairperson.

The earthquakes of 2015, still very fresh in the memory, were not only a setback for the organisation, but also the Nepali committee, who were all affected personally by the events, many of them rendered homeless themselves. It brought them together in ways meetings never could and provided a catalyst for being actively involved in some of the reconstruction and relief programs which affected so many including their own families and neighbourhoods.