Greetings one and all,

As usual, it has been a while since the last nagarmail. I hope this finds you all in good stead. The 1st half of 2017 has been a busy and productive time, Nagarhope’s focus finally switched from assisting other earthquake affected schools to reconstructing our own school in Sathikurya, Kavre district.

In December 2016 and January 2017, work started simultaneously on de-constructing our initial school building and construction of a 2-roomed iron truss and stone building, complete with tool-storage shed. We had been running overcrowded classes in 3 temporary tin and bamboo classrooms since the earthquakes had irreparably damaged our old building. 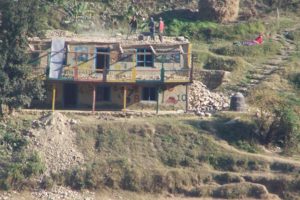 In March of this year, work began on the re-construction of our old building on the existing unaffected foundation, using new earthquake-resistant approved regulations and guidelines, as set by the government of Nepal in co-ordination with international organisations and INGOs. As of June 2nd, remaining works include plastering the exterior walls, painting and electric fittings. These 2 rooms will be utilized initially as computer room / library / office with the attic space accommodating a storage facility for unused materials such as doors, windows and wood. 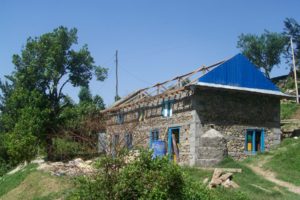 In April 2017, the new school year commenced, we have now started running Primary Grade classes (Class 1) as well as Pre-primary. Each year, we upgrade one class, and before April 2019, we will be compelled to construct a 6/8 roomed permanent building to accommodate the growing number of children and staff. 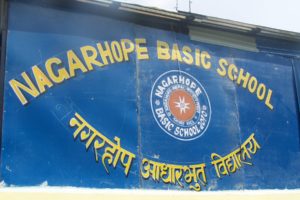 Currently, 59 children attend Nagarhope Basic School, we have 6 teaching staff. Our caretaker, Binda Gurung, has planted an array of vegetables and herbs in our vegetable garden as well as a selection of fruit tree saplings such as plum and pear.

Devi Primary School in Bhirpani, Ramechhap District is by far the most substantial in terms of size and budget, thanks to a grant from Electric Aid in Ireland. This 3-roomed school building and toilet is 80% complete. 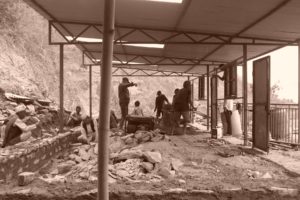 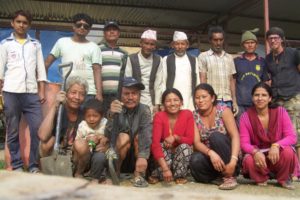 A friend from Belgium, Maria Gilles, and her organisation provided assistance to 7 earthquake affected families in Bhaktapur and Nagarkot of about €450 per family. This program was completed in February 2017, some of the families using pooled resources, managed to construct a small house, others used the money to buy materials that will be used when they do start to construct a house using government grants.

On March 8th, International women’s day, Nagarhope, with kind donations from several people, ran its 8th annual women’s day picnic in Koshi Pahri, Dolalghat. 110 women, 20 volunteers & cooks, 3 buses, two goats, lots of music, games, singing and dancing and an amazing amount of co-ordination and organisation by Dhurba Bhujel made for a fantastic day, getting older women out of the daily grind, for a day of fun and freedom they rarely get to enjoy. Thanks to all involved. 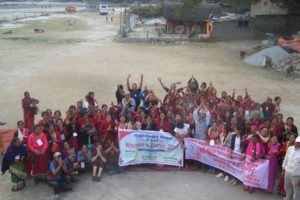 In early April, we brought 25 kids from Teku/Kalimati areas in Kathmandu to our own school in Sathikurya for a 2 night stay. Kids living in cramped and unhygienic rooms in dusty Kathmandu enjoyed the bus journey, village walk, art, sport, food, music, movies and singing into the relatively wee hours. Many thanks to Rupa Miss, Menuka Didi, Raju Dai, Dhurba Dai and all other helpers for making it a great success. 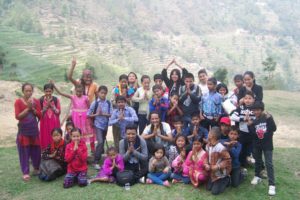 On Baisakh 12th (April 25th), the 2nd anniversary of the 1st of three devastating earthquakes, we ran our 2nd annual blood donation programme in co-ordination with WE CAN Group, VISION group and Bhaktapur Red-Cross. 164 people donated a litre of blood each on the day, a phenomenal amount that kept the Red-Cross nuses and 50 or so volunteers busy all morning. A massive credit goes to our Nagarhope Nepal Chairperson Rabindra Suwal and his hordes of volunteers for impeccable organisation. 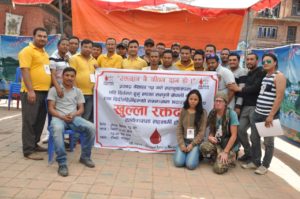 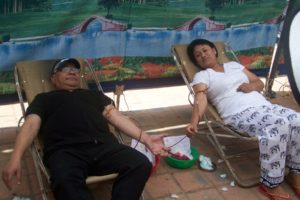 Its days such as these, the Blood Donation programme, the Women’s picnic, kids trips that make it all the more worthwhile. Bringing groups of people together whether it be for fun or a good cause is simply invigorating and certainly makes me believe in the work that we do. Togetherness  has a mystifying magic to it, a magic that uplifts and mesmerises.

A few people close to us have passed away recently. Deep condolences to the family and friends of Sanjay Suwal, a good friend and fellow worker, only 22 years old, who we have had close contacts with for several years. He died from recurring colon cancer, unable to pay for chemotherapy treatment. The world is a very injust place. He is still sorely missed by all who knew and loved him. Also to pass away in 2017 were the father of our chairperson Bishnu Bhakta Suwal, also from cancer, and Saili Gurung, only 12 days ago, mother in law of our school caretaker Binda. May their souls rest in eternal peace.

The people of Nepal are in the process of voting in local level elections at the moment. For the first time in 20 years, local people are being elected to wards, village councils, municipalities and cities across the country. Voting in 3 of 7 federal provinces has been completed with the remaining 4 due for June end. There is hope that the spotlight on these individuals by one and all may help to wipe out the endemic corruption that has plagued and poisoned all facets of life for far too long.

The monsoon rains should have been due to start around now, but we have had monsoon-like rains ongoing for almost 3 months now. Whether it continues remains to be seen, but for hundreds of thousands of people still living in temporary makeshift shelters, another monsoon under tin roofs only compounds their misery.

Re-construction of damaged school buildings has been swift enough in all but the hardest to reach mountainous regions, but the pace of re-construction of individual housing has been snail-paced from the off. The initial grant ($500 of a total $3000) has been widely disbursed, but it is barely enough to buy the necessary materials needed to construct the initial foundation and pillars needed to be able to qualify for the 2nd ($1000) and final ($1500) installments.

I’d just like to add that during these trying 2 years, it has been amazing and reassuring to see the support from Ireland and beyond in response to the earthquake appeal. On behalf of both the Ireland and Nepal teams, I thank you all from the deepest depths of my heart for your continued support, goodwill and charity. Without you all, our work just would not be possible.

PS: Please support our upcoming fundraiser in Westmastown Centre – Elvis and The Way it Was Orchestra are in town on 21st July to help raise funds to build our first school in Nepal.